Are SMART goals the answer in Food Safety Management?

Many years ago (just shy of 400...) a French bloke named Descartes had a crazy idea. He thought to himself: "If it can’t be measured, it’s not worthy of our attention. God likes math. Only math matters." Some people disagreed but Descartes was pretty convincing. As a consequence, SMART goals were born and they ruled. 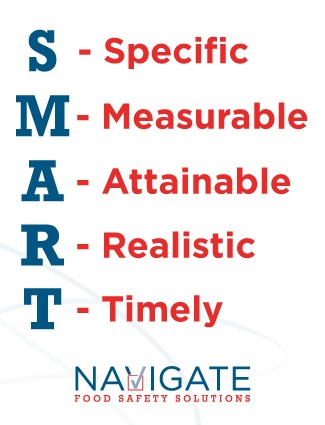 Fast forward a few centuries and the detractors now include some very influential factions - like quantum physicists- which led to the birth of a whole new branch of science. These folks spend quite a bit of their time advocating against measuring everything. Their credo, "Things are most definitely not black and white. There’s a lot of grey!"

Descartes didn’t really come up with SMART goals. But he was a very convincing champion of M for measurable. And in the food safety world, we definitely focus on the M.

Like Lulabelle, I have mixed feelings about SMART goals from a very pragmatic point of view. Sometimes they work, other times they bring confusion. Here’s my take on the quandary.

First, let's tackle step change: If we think about food safety management here are a few examples of times when we may want to consider a step-change

Building capacity in a team or moving from complexity to simplicity requires adopting a completely different pattern and establishing completely new dynamics. The two patterns are very distinct but you would have nothing useful to measure.

In this case, you might use teamwork or simplify as goals and your initial target will be to move from ineffective to effective. You are not hitting the simple or the teamwork target yet but you know you are on your way. Measuring would be would impossible so this isn't the place for SMART goals.

Second, let's look at incremental change and the type of situation is where measurable goals are really valuable.

Fine-tuning, optimizing, and quantitative change are all measurable goals and are perfect for SMART goals.

So as a guideline we offer the following:

So there you have it! When it comes to food safety management SMART goals are best used in a situation when you want to measure incremental change. They are not the only answer and are only smart when used in the right situation.

What is management's role in food safety?

In an initial meeting with a new client several months ago, the plant manager told me he was...

5 Steps to Working Together as a Team

Have you ever watched a team, any team, anywhere, that seemed to be working together effortlessly?...

Defining the Role of Upper Management in Food Safety

I met a Plant Manager once who was the only person on the entire staff who knew how to operate a...